Deep in his mountain-side meteorology lab, the mad scientist Kelvin has mastered weather prediction.
Recently, Kelvin began publishing his weather forecasts on his website. However there’s a problem: All of his forecasts describe the temperature in Kelvin.
With our knowledge of JavaScript, let’s convert Kelvin to Celsius, then to Fahrenheit.

JavaScript Versions: ES6 and Before​

Ever heard of the term "ES6" and wondered what it's about? Click on this article to read and find out!

You might have seen the term “ES6” or “Javascript ES6” and wondered what it actually means. Well wonder no further, because we’re going to dive into what ES6 is and how it relates to Javascript!

These new ECMAScript standards provided rules for the architecture of JavaScript features. As new programming paradigms emerged and developers sought new features, newer versions of ECMAScript provided a basis for a consistency between new and old JavaScript versions.

To fully distinguish the difference between JavaScript and ECMAScript: if you want to create an app or program you can use JavaScript — if you want to create a new scripting language you can follow the guidelines in ECMAScript. So, when you see ES6 or JavaScript ES6, it means that that version of JavaScript is following the specifications in the sixth edition of ECMAScript! You might also see ES2015 instead of ES6, but both terminologies are referring to the same 6th edition of ECMAScript that was released in 2015. Take a look at the timeline below to see how JavaScript has evolved over the years: 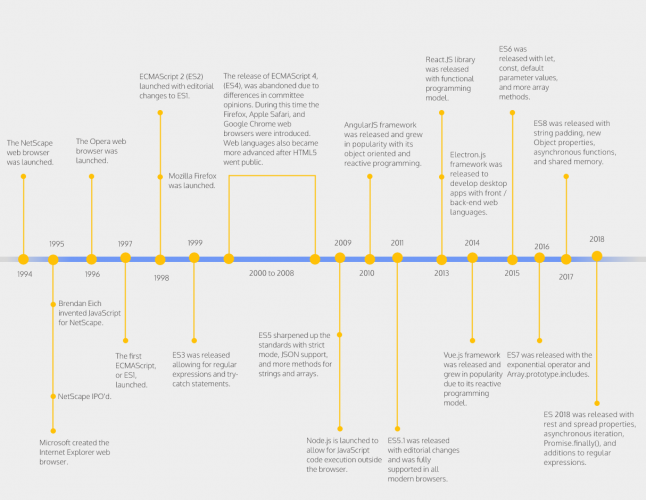 Now, you may be asking, what makes an update in 2015 still relevant today when there are more recent updates like ES7 and ES8?

Well, despite the release of newer versions, ES6 is actually the biggest update made to ECMAScript since the first edition released in 1997! Some developers even refer to ES6 as “Modern JavaScript” because of all the major additions. There were so many great features added to help JavaScript developers that include:

Up-to-date browsers now support most of the ES6 features which allow developers to take advantage of these new additions. ES6 ultimately allows programmers to save time and write more concise code. Take for example pre-ES6 syntax for function expressions:


JavaScript:
With ES6 arrow functions, we can transform the expression above into:

JavaScript:
However, arrow functions are not just simply syntactical re-writes. As with other ES6 features, there are other underlying benefits and tradeoffs to consider. Nonetheless, there has been a strong adoption of ES6 in the development community. Benefits such as new ES6 syntax, makes it easier to utilize a popular programming paradigm, Object Oriented Programming (OOP). This change allowed for developers of other languages who are used to OOP can now transition into learning and using JavaScript. Another reason for the popularity of ES6 is correlated with the usage of ES6 in popular frameworks like React. So, if you want to learn the newest tools and frameworks, you will have to pick up ES6 along the way.

This being said, we shouldn’t disregard legacy code, i.e. older versions of JavaScript. In fact, there are still many projects that are built and maintained with legacy code! If you want the ability and freedom to work on any sort of JavaScript project, you should familiarize yourself with pre-ES6 and ES6 JavaScript syntax. But don’t worry, we cover both pre-ES6 and ES6 in our JavaScript course. Check it out to become a rockstar at JavaScript basics and learn fundamental programming skills!
Для ответа нужно войти/зарегистрироваться
Поделиться:
Facebook Twitter Reddit Pinterest Tumblr WhatsApp Электронная почта Поделиться Ссылка
Верх Низ